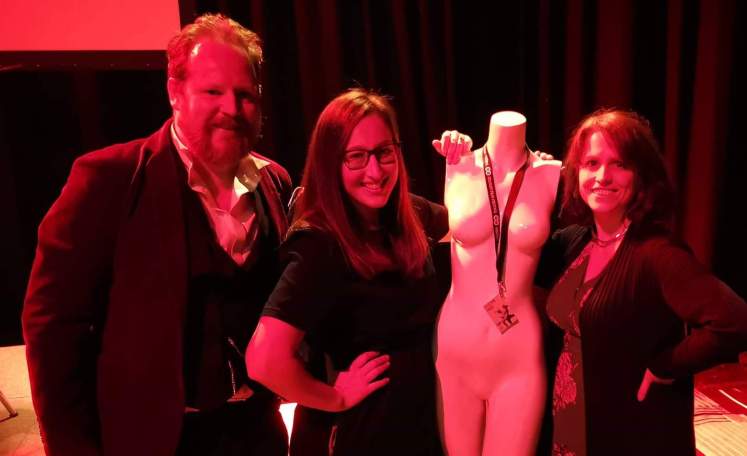 Looking at the tenuous line between the sex permissable in certain mainstream art cinema, and that placed in the restricted pornographic realm, demands a screening. And we wanted to screen something, but a pornographic feature demands a license to operate as a adult entertainment venue and as we outlined here, that wasn’t economical let alone likely to succeed in the traditionally conservative pastures of Northern Ireland.

We looked into screening clips, but I was reluctant to present a disconnected body of ‘money shots’, which is what essentially we would have had to do. Advice from an academic friend who specialises in pornography, warned me to be cautious with regards R18-certified material. In deferring to the potential concerns of our partner organisations and funders, we opted to remove any screening aspect. Alternative visuals were considered, but owing to time constraints were not possible to bring together on this occasion.

Our audience seemed enthusiastic and willing to engage for the most part. We’ve never shied away from difficult topics, and specialise in audience interaction. Our conversation is shaped by our conversation with the audience and this was no exception.

A number of them were making extensive notes in jotters, something we’ve not noticed at our events outside of educational establishments before. Evidently this was a debate which inspired thought and there was more than enough for a follow-up or re-run.

The podcast will present a largely intact version of the session, with a few minutes cut for legal and content reasons (there is always at least one person trying to derail the focus of the debate, and that was the case here). But the main thrust (ehem) was around censorship; the conflict between what is accessible online and what is legally allowed in public; the focus of male and female sexual desires; exploitation; and the legal limits in Northern Ireland and the UK. We talked about art films like 9 Songs and Ai no korīda alongside more obviously pornographic titles like the legendary Deep Throat.

A few days after the event, we were invited onto the Stephen Nolan Show – the programme with Northern Ireland’s largest radio audience – to discuss the event and our positing of a sex cinema in Northern Ireland.

Listeners in NI will know Nolan’s penchant for the controversial, but we felt that it was worth the risk in order to reach a wider audience. The interview was pre-recorded and aired on BBC Radio Ulster on 3 May 2019 on Nolan’s breakfast show.

You can listen back to the segment between Stephen Nolan and Robert JE Simpson below.

Just to have a debate about adult film on breakfast radio in Northern Ireland is quite something. Judging by responses, it’s prompted much thought. We’re still looking into the legalities of organising an associated screening, and would be happy to continue the debate in Belfast or elsewhere. Do get in touch if you’d like to facilitate.

Our very own @robertjesimpson was on #MollieGreen's show on @bbcwm tonight (31 July 2021) to talk about classic #horrorfilm #TheExorcist ahead of its 50th anniversary sequel from @blumhouse going into production.
Oh my gosh, we had an in-person meeting tonight down at @accidentaltheatre.
The wonderful #RobinWilliams would have turned 70 today.
Apologies.
It's All Pretend
We're not saying that the world powers have let off nuclear weapons, thereby putting the earth off its axis, and plunging the planet into a collision course with the sun. It just feels like it.