Comedian and actor Tony Slattery rose to fame in the 1980s as a star of the comedy improv scene, and part of the phenomenally successful Whose Line Is It Anyway on Channel 4. With appearances on the big and small screen including Just A Gigolo, Kingdom, The Crying Game, How to Get Ahead in Advertising and Peter’s Friends, Slattery was ubiquitous. In the early 2000s Slattery had a very public mental breakdown, which has threatened to overshadow him since.
In this exclusive interview, Tony Slattery is in conversation with Robert JE Simpson, exploring his career and his mental health experiences. Recorded in front of a live audience.

Sleeve notes are below.

With Robert JE Simpson, Tony Slattery and Robert Ross
The episode contains an extract from Whose Line Is It Anyway, series 5 episode 9, broadcast 30 April 1993, produced by Hat Trick Productions for Channel 4.

Download/stream below, or subscribe via your preferred podcast supplier.

You can leave your thoughts on the episode via the comments below, or on any of our social media channels, or leave a review on iTunes. 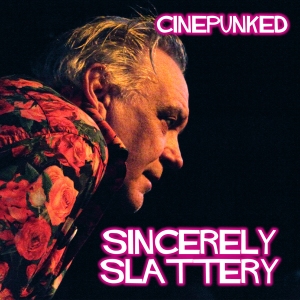 In the 90s you couldn’t escape Tony Slattery. He was everywhere – lampooned by Private Eye – a constant screen presence. And then his career derailed a little thanks to a very public mental health illness. For the last couple of years, Tony has been touring the UK (mostly in the company of British comedy historian Robert Ross) with two shows – one, an improv piece, the other an unscripted interview show which focuses on his career, but with mention of his mental health experiences. I first met Tony at the Edinburgh Fringe, through Robert. I saw him do both types of shows, and witnessed the unpredictability first hand – a sort of dangerous excitement that had made him so appealing to me as a kid watching Whose Line Is It Anyway? in the early 90s. Over the course of several days in his company, and further meetings in London, I got to know the warm soul of the man, often overlooked in tabloid reports of extreme mental instability – the result of years of undiagnosed conditions, drug and alcohol abuse. And quickly the idea to bring Tony to Belfast was mooted.

As part of CinePunked’s programming strategy, and my own personal interest, we set out to include mental health awareness into our projects. And a series of live events, and podcast discussions were being developed that would allow us to navigate the territory. Within that, Tony agreed to come to Belfast, with our mutual friend Mr Ross, for two special live events. The first was to be a new unscripted show developed by the two Roberts, based around comedy and mental health, in which all three of us would appear, called A Comedy of Madness (which will be released on the next edition of the podcast). The second show was to be a long-form interview between Tony and myself.

Tony’s live show with Rob is entertaining, funny, poignant and unpredictable. Rob know’s Tony’s career inside out and has a great rapport with him. And I didn’t want to tread on his toes, or be a pale imitation. And so, for our show we agreed to a no-holds barred interview that would focus on his mental health in an educational manner. These two events were a platform for us collectively to address the stigma surrounding mental health awareness, and particularly male mental health. They would let us talk critically about our heroes, and be deeply personal about ourselves. With the longer running time for my conversation, there was scope to explore some of the issues in a little more depth, and if anything came out of it, we had time to follow it.

This would be Tony’s first onstage appearance in Belfast since 1983 when he graced the stage of the Grand Opera House with Richard Vranch. Tony’s own family are Irish too, so there was very much a homecoming vibe to things too. Tony turned 60 just two days later, so this would also be his 60th birthday show.

From time to agreement to actual event was around a year, and in the interim Tony gave a frank interview to The Guardian and made a touching appearance on ITV’s This Morning. And then a documentary crew for BBC’s Horizon programme started making a film about Tony and his possible bipolar condition. They asked if they could come and film our shows, which we agreed to. As part of that, the team from Sundog Pictures ensured there was a psychologist in attendance for the events, and set up a meeting between Tony and them for the morning after our interview. The Belfast trip would turn out to be significant, and led to a breakthrough in Tony’s processes, as you’ll see if you watch the film.

I always knew there was potential for the trip to make an impact for Tony personally. I’d always felt, and still do, that Tony has things he needs to explore to find peace and to recover. We tried to set up a safe zone around him so he could do the show on his terms, without negativity, and the result, is an engaging, entertaining, poignant interview. There are moments of real honesty and self-awareness, and sharing. Early on we nearly head straight down the rabbit hole, but I had a duty of care to all in attendance, and to Tony, to navigate that with structure, and we held back. It was the right call on the night. A night that ended up including an impromptu improv game!

These sorts of conversations are difficult enough in private, but to do them in front of an audience takes courage. In each of the events we’ve done together, Tony is frank, insightful, and makes valuable contributions. We know each other well enough now to trade friendly jibes, and to let our respective guards down.

A small part of the show made its way into the documentary What’s the Matter with Tony Slattery. Our podcast features a recording of the entire show, uncut. Its our longest podcast to date. Its an important conversation. Too important to trim.

Listeners should note, we had a technical problem during the recording. Tony’s mic dropped out just as he stepped on stage and so we’ve had to source his audio from the other feeds, mostly from my mic. Tony spotted the problem on stage, but reassured by the audience, I didn’t realise the mic had cut. We hope to upgrade the recording at a later date from an alternative recording from the documentary crew – the pandemic has prevented us from following up on this ahead of the initial release. We beg your understanding, as the plan has always been to tie this in with the documentary broadcast.

Friend of the show, and member of the extended CinePunked family, Robert Ross, kindly introduced the interview on the night – a peculiar reversal of roles – and handled the Q&A section (and rarely for our live events, I haven’t had to cut the audience participation) and impromptu improv.

We’re releasing this recording on 21 May 2020, immediately following the BBC2 debut broadcast of the documentary What’s the Matter with Tony Slattery, during Mental Health Awareness Week. We will be posting additional mental health themed editions during the next month. It remains an important thread in the CinePunked agenda.

A show of this nature is indebted to many people, who help make it happen. My personal thanks to Tony Slattery, Robert Ross, Mark Hutchinson, Clare Richards, Kate Fish, Sundog Pictures, Pete McCloskey, and Crescent Arts Centre.

Recorded live at the Crescent Arts Centre, Belfast, Northern Ireland on 7 November 2019.
Engineered and edited by Robert JE Simpson, with additional EQ by Ben Simpson and first published on 21 May 2020.

Processing…
Success! You're on the list.
Whoops! There was an error and we couldn't process your subscription. Please reload the page and try again.