It’s the CinePunked annual Christmas special – and for 2021 the gang delve into the Richard Donner-directed adaptation of Charles Dickens’ A Christmas Carol – Scrooged, starring Bill Murray

Sleeve notes are below.

Download/stream below, or subscribe via your preferred podcast supplier.

You can leave your thoughts on the episode via the comments below, or on any of our social media channels, or leave a review on iTunes. 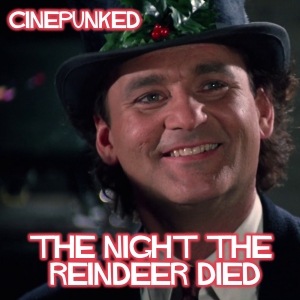 In spite of many plans, 2021 has seen the CinePunked podcast take a back seat, but with the Yuletide season once again upon us, and with Dr Rachael Kelly back from her maternity leave, our intrepid critics have assembled for a new run of the show.

As host, I decided to exercise my editorial position and selected one of my favourite Christmas films – Scrooged. There was only so long we could go before we would have to cover an adaptation of A Christmas Carol, and with Ghostbusters back in the popular conscience, it seemed like a perfect time to revisit.

We’ve elected not to dwell too much on the production history for the film, which was by many accounts, rather fraught. There’s plenty of places where you can explore that, but we were more interested in navigating some of the thematic elements of the story. With trauma/mental health becoming a surprisingly present topic, along with elements of childhood development.

There’s always a risk with a CinePunked record, that in engaging in critical analysis, a beloved film will suddenly become unpalatable, and there’s certainly food for thought in this one. Some of the themes are picked up again in the next edition (already recorded), on The Transformers: The Movie. But more on that next week!

We recorded this via our professional Zoom account – which has served well during lockdowns. There does appear to have been some slight reverb with a couple of the mics, so the sound quality isn’t quite up to our usual 100%, but hopefully not too distracting.

The episode contains audio clips (used within fair use provision) from the following:

Scrooged is available to buy on DVD/BluRay, and also via multiple streaming services.

Recorded during via Zoom in Comber, Dundonald and Newtownards, Northern Ireland on 15 December 2021 with our separate home studio setups.

Processing…
Success! You're on the list.
Whoops! There was an error and we couldn't process your subscription. Please reload the page and try again.